In a quest for less log-ins and more focused time to work on the Origami Republika archive I might soon close my facebook and put it on the shelf along with the origamiboe-twitter account and various myspaces.

I'll try to only use http://twitter.com/OrigamiHQ, this newsblog, and of course our origamirepublika@gmail.com account, please follow us.

Our collegue Karen Karnak Elliott have promised to collect links and stuff relevant to the archive, befriend her on http://facebook.com/origamibody

The Origami Republika group on facebook will continue: http://www.facebook.com/group.php?gid=62103259919

Yours truly, Boe (archivator)
Posted by origami republika at 2:40 PM No comments:

Holy macaroni, we start the new year with a bang

New subunit Origami Kaførrnokka has just released their debut cassette minialbum "Origami Kaførrnokka" on Tape Rape > "This is a trio with Ronny Wærnes A255, Petter Flaten Eilertsen A219 and Kjetil Hanssen A268. These three noisemakers got together in November 2009 and recorded their first cassette together. Chaotic, gravely and quite humorous in its own way and comes in a zipper bag. Sprayed tapes that looks neat and beautiful, so grab one of the 50 copies before it's gone."

Origami Boe's "Acoustic Laptop Orkestra 010A oslo 2008" is now available for download >
"This is the first in the series of zipped acoustic laptop documentations and contains audio sessions, the opening concert, edits from the video documentary by Tom Løberg A186, pdf version of the paper catalogue and extra fotos. It is an updated version of the download by Ambolthue."

A couple of months ago the electro-acoustic duo KA did a live reunion, and to celebrate they published their complete back catalogue in 8 zips as the free download "KA sett", with bonus tracks, compilation entries and fotos. The two last parts are previously unreleased, and has also been released as uncompressed version on cdr.

Do not forget to send in your physical object/artwork/miniature for the vestibule of Origami Grafika's "Microgaleria Sur", open to all regardless of artistic background/talent.

The full list of Origami Republika members (aka agents) is uploaded again. If you are a member, please find yourself, check any details (want to be listed under full name/initials/artist name?) and fill in the questionnaire if you haven't already. Also see how to join, share and help the origamism.

I have updated our new server. For now you can find a.o. the complete audio works of our electro-acoustic duo KA for free downloading, pictures from our microgaleria sur, and a lot of acoustic laptop material (free download, pics, etc). 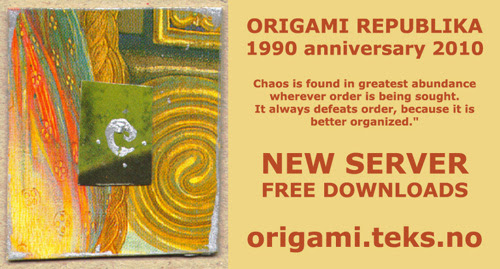 Posted by origami republika at 1:31 PM No comments: